HP UFT uses, Visual basic Scripting for development and the execution of the tests.

HP UFT was originally developed my Mercury Interactive corporation and the first version of the tool was called Quicktest professional. HP acquired Mercury Interactive in 2006 and hence the tool was updated as HP’s Quicktest professional. HP has another product which is used for testing web services called as HP Service test. By the end of December 2012 HP merged both of the products into one and finally introduced HP UFT. 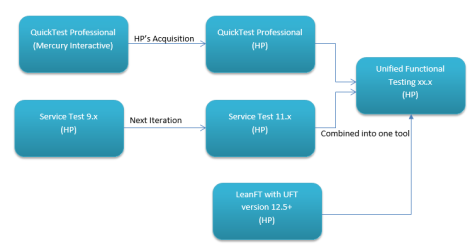 HP UFT can now be used for creating and running integrated GUI and web services tests.

LeanFT is the set of API’s  (Application programming interface) just like selenium used for so many year’s. These set of API’s will help, you in writing the automated tests within Visual studio and eclipse. You can Read more about LeanFT here